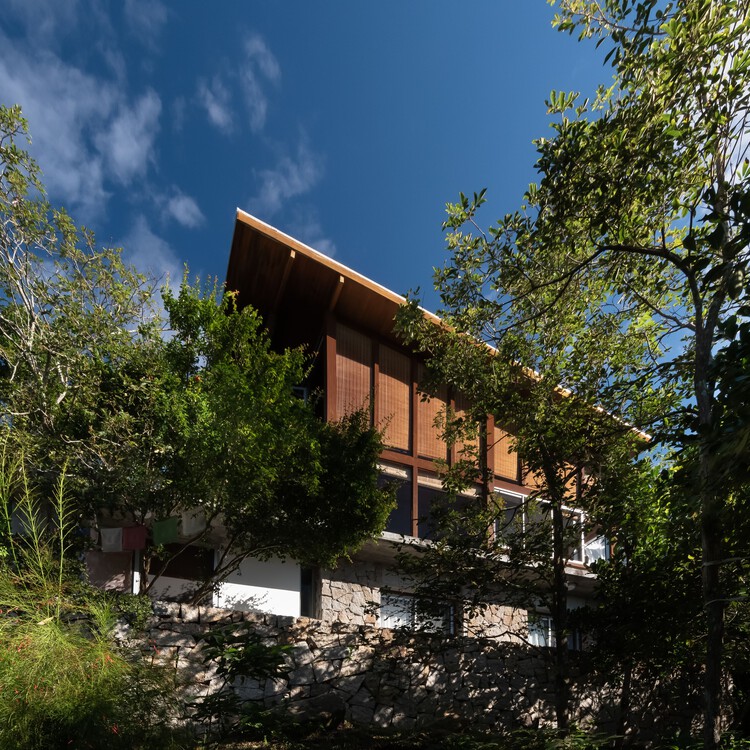 Casa da Silveira was originally designed by Helena in 2000 as a single compact volume – a glass and wood cabin standing on a stone base. Inside the stone base were placed the bedrooms and bathrooms; and above them, the glass prism modulated in plan and height in order to create flexible spaces whose only fixed function is to allow integration with the natural landscape.

Two decades ago, Casa da Silveira related to the landscape as a vertical prism, opposing the horizontality of the lawns and low vegetation of the surroundings, outstanding not for its materiality or size, but for its proportions. But time goes on. The transparency of the building allowed following the recovery of the hill’s native vegetation – the result of cycles of planting, observation, and maintenance – and also the process of built development in the area, imposing new relationships, new landscape frameworks, and new proportions to the surroundings. The children also grew up, and the new logic of use emerged. The house, then, needed to gain a little more comfort and update its relations to the site.

Strategy. We chose to expand the volume of the base – fit a new suite under the projection of the old deck – in order to take advantage of the land cut made during the initial work, and maintain the same projection area of ​​the volumes. The rearrangement made it possible to transform the former bathroom of the suite into a laundry room, configuring a service and circulation corridor next to the retaining wall.

The composition strategy was to extend the volume of the base and insert between the two volumes – base and glass box – a concrete plane that finishes off the top of the stone masonry while creating a protective marquise for the balcony of the rooms. Paved plans were organized around the house, according to existing and new gardens, some rocks, and the densification of the surrounding woods. Finally, substituting a fire pit used as a barbecue place, a quincho fitted to the hill was designed as if it were a kitchen window open to the landscape.

Results. This results in a continuity of the formal and spatial relationships defined by the original project. Not a static continuity, but an adaptation: the context has changed, and the house has also changed to continue in frank and positive dialogue. Casa da Silveira gains more space and comfort as it grows and expands as the natural environment around it also does. A glass and wood cabin that is now in the middle of the woods: where there were only bushes, now trunks can be seen; where before there was the only sky, today there are green canopies; and where there was only grass, there are gardens, and an orchard is already growing. Thus, while the vegetation becomes vertical, the house becomes horizontal and assumes a more invisible and discreet role in the landscape. Time passes, the landscape and life change, and the house follows suit.